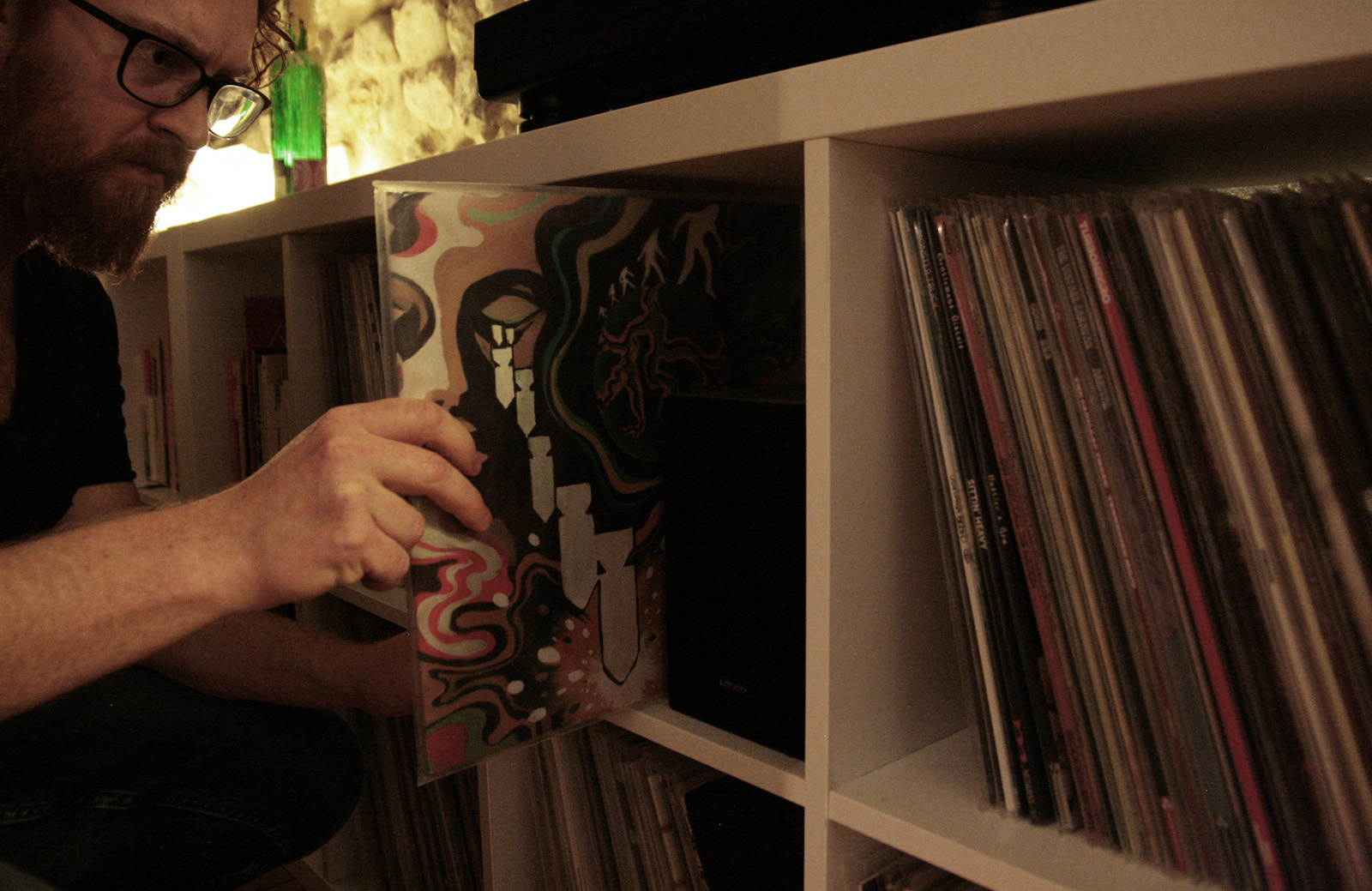 It’s so great we have a special guest in our series ’Fateful Records’. Ben Philips presents so many great music on his radio station day by day. Now we ask him about his most memorable records…

My Name is Ben, I am 36 and I live in Constance, Germany. My life has always been full of music. My dad was a DJ and guitarist in the 60s and 70s playing Rock music of all kinds so this was what I grew up with. A couple of years ago I started collecting Vinyl again and began deejaying in a friend’s bar joining a group of people who are also very much into Rock Music. In late 2016 I got a Radio Station from laut.fm. My Love for Scandinavia set the name and topic for what would become a huge part in my life.

So Viking has been up for over a year now and besides giving me the opportunity to play whatever I like it also made me dig deep into music and find a lot of new stuff that otherwise would not have come to my attention. It also got me to know some very interesting people, hosting a gig with Ozone Mama in my hometown probably would never have happened if it wasn’t for Viking.

So now I am standing in front of a huge task of writing about the 10 most influential albums of my life. 100 would have been a lot easier. So here is my try, I hope you enjoy:

Jimi Hendrix is one of the earliest musical memories I still can remember. When I was little, my parents woke me up in the middle of the night when we went on holiday. My Dad often put Hendrix in the car’s stereo so he played the soundtrack to a dark Europe that flew by while I was looking out the window.

To this day Jimi Hendrix is one of my heroes. I think no one ever matched him in the combination of virtuosity, songwriting, message and charisma. And this album is the pure essence of this character. As many debut-albums are, this is also the product of a musical genius developed over the lifetime of the artist so far. Even though his later albums are probably more interesting musically, „Are You Experienced“ has most of the key songs of his career like „Purple Haze“, „Manic Depression“ or „Hey Joe“ (since I own the american release). I am amazed how you can still put a smile on everyone’s face with playing Jimi’s songs, so „Are You Experienced“ is always in my bag when Ieave the house for a DJ-gig.

No album in the world is a better stereotype of psychedelic swinger lifestyle in the 60s for someone who was not there. I was not born until 1981 but for me living in the 60s must have been like that. Maybe it is just because Jefferson Airplane is used on every soundtrack of every movie that was set during that time. I don’t know.

Songs like „White Rabbit“ or „Somebody to Love“ have a feel to them that probably would not be possible to reach again today, even if you had the right people, the right drugs and really made an effort. But they influenced a whole generation of musicians who make the psychedelic sound live up today. And that is just a sound I very much enjoy today, even sober.

Of course I had to include an album in this list that had huge influence on the Southern Hard Rock genre. It is easy and appropriate to turn to Creedence or Skynyrd when it comes to that question but I decided to include an album that has not yet reached its appropriate recognition among a wide public. The records opener „Crazy Man“ is one of the coolest songs that were made during that era.

Josefus were once called „The Lost Pioneers of Heavy Metal“ in Classic Rock Magazine. I think it’s a real pity that they could not create more fuzz after 1970 when a lot of that kind of music was created. At least they gave that one the world. So thanks for that.

Well yeah… do I really need to write something about this? Without the Ozz-Man, no Metal, no Doom, no Stoner. At least not in the way it turned out. I am always a little pissed when someone says „Sounds like Ozzy!“ when I play some modern Doom-Band, but it shows how ever-present an artist is when he establishes a whole genre. Every time I watch a documentary about some Rock musician, I place a bet how many minutes into the movie they will make some Ozzy-reference. And as much as it gets boring that every one has been influenced by him, the fame is well deserved! You can turn every party to ecstasy if you play „Paranoid“. So why not include that one in this list? Answer is easy: I think their debut has the best song Black Sabbath ever made: „The Wizard“.

I am afraid I have to join the choir of people who can’t hear „Stairway to Heaven“ anymore. Yes, it is one of the best songs ever made, but even that one can be overplayed. So I was leaning towards „Led Zeppelin II“ to include in this List, which I listen to more often nowadays.

But since this is an „Impact on my Life“ decision „Stairway“ becomes a factor again. I very well recall how I was struggling with it during Music School when my teacher thought it was a good idea to play it with the band I was playing in. That was the moment I realized I probably was not a super-talented guitarist. So let’s blame Jimmy Page that I am not a successful musician today… Nah, can’t do that, it was probably my own lack of ambition, agreed.

But the real reason to include this album is „Black Dog“. That voice, that riff! Wow! I think this song in special is the role model for a lot of Hard Rock that came afterwards and that I listen to today.

I love female fronted Rock Music very much. It always has different vibe to it, a little more feeling, a different view on life and music. That love goes back to Janis Joplin. Deeply rooted in Blues, Folk and R&B she always managed to drag me right into her songs, her world and her feelings. No one ever could suffer like she did.

The fact that this album features an instrumental-track (Buried Alive in the Blues) that could not be completed because of her sudden passing is a reminder of so many artists that died way to young. I am always wondering what all those artists, especially Janis Joplin, would have, could have or may have done in their lives.

I remember when I was in 3rd or 4th grade I had to record a radio show for homework. So I went to my older brother’s record collection and played the music I knew from him. There was a lot of AC/DC in that show and my teacher did not find that very funny. She thought the Devil was living in our house what I didn’t really understand because Rock ’n Roll was just a normal thing for me growing up. Especially AC/DC of who my Brother always has been a huge Fan.

So picking a AC/DC-Album for this List is not easy but „Back in Black“ is the one that still stands out. Even though I liked the Bon Scott era better in general, this is the best album of them all. I think this was the first album that sported that Stadium-Appeal that made AC/DC really big in the 80s but still has a lot of that Working-Class attitude of the 70s. And I also think that „Back in Black“ was the real start of a signature sound that influenced generations of Rock Bands. A sound that is so deeply connected to AC/DC that no other band can play similar music without being compared (a comparison that is usually impossible to win).

I recently saw a Youtube clip where some Youtuber listens to this album for the first time in his life while driving around in his car. I don’t know how 25 Years can pass for a human being without ever having heard this album, but I loved how that guy went from an irritated „What the Hell is this?“ to screaming „FUCK YOU! I WON’T DO WHAT YOU TELL ME!“ from the top of his lungs within minutes.

I got very much into Hip Hop in the early 90s so this combination of Rock and Rap was just a revelation (and honestly left most of the following Crossover and Rap-Rock-Music in shame). The brutal power and simplicity of it was the perfect soundtrack for a rebellious youth in the 90s. Not depressive and disaffected like the Grunge-Generation, but out on the streets with a loud voice and their fists up in the air.

When it comes to Retro Rock, if you really want to listen to music that combines sounds of the 60s or 70s with a modern vibe and an own personality, there is no way around Siena Root. This Band from Sweden has it made. With changing musicians they have been doing a perfect modern version of Psychedelic Blues Rock. I love every Album and am really struggling to pick one out, but the one that stood out a little was „Kaleidoscope“ with singer Sanya.

Those musicians definitely listened to a lot of Psychedelic Rock in their days. Organs and Sitars are combined with a classic Rock setup to a very special mixture that is not unfamiliar but (in my opinion) not often heard in modern Retro Rock. Songs like „Nightstalker“ are prototypical to me why modern music that quotes, commemorates or even copies Classic Rock music is far from boring or out of time. If anything it keeps that music alive.

It might be a bold call to include an album from a little known band from Sweden that is just two years old. But this album just keeps coming back to me. It blew me away when I first heard it because of its psychedelic hippie-vibe combined with a load of Heavy Blues Rock. The aspiration for a better world speaks out of every line that Matilda Roth sings, so it has a lot of identification potential in it.

This album always comes up when I don’t know what I wanna listen to. I hear it when I am riding the bus, when I work or when I need to disconnect. It was with me on travels through Norway, on long hikes or while watching the Midnight Sun. When you listen to an Album while exploring unknown territories, it forms a strong bond and you always have a good feeling when you listen to it again later. Like a diary it recalls memories, that’s what happens to me every time I hear it.

I think it was when I was 13 or 14 Years old I went into my Brother’s room looking for some new music. He was a huge Rock and Metal-Fan but he had one record that would not match the others. I took it and one hour later I was deeply hooked into Hip Hop. At a time when I knew nothing about that kind of music (maybe except „Die fantastischen 4“) this was mind-blowing. It made me dig deep into a new World and even made me become a rapper for a couple of years. I very much enjoyed the classics like Mos Def, Gang Starr, Wu-Tang Clan or Nas (and still do from time to time) but the direction Hip Hop took after the year 2000 made my interest disappear. Still this certain record finds the way into my ears regularly.